How Our Thoughts Change When We Fall Asleep

Authors of recent study claim that in REM sleep dreams, “to think is to do.” 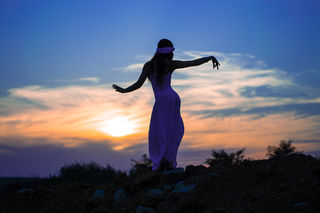 As we fall asleep, our cognitivefunctions begin to decline, while at the same time we become more and more immersed in an imaginative and hallucinatory world. Our brain goes through distinct neurophysiological states as we move from waking, to falling asleep, to deeper sleep, and we now know that certain states, particularly REM sleep, are marked by vivid dreams that are fully sensory and perceptual, even as we lie motionless in bed.

While many studies over the years have collected dream reports from different stages of sleep and analyzed their content, the current study is putting forth a new and potentially more reliable method for assessing the content of dreams. Specifically, the authors have developed a method of quantitative linguistic analysis using a computer program. They call this a new Measure of Hallucinatory States (MHS), and the analysis is designed to detect certain aspects of a dream report, specifically whether and how much the report contains motor imagery or cognitive thoughts. Moreover, the measure can assess the ‘cognitive agency’ of thoughts in a dream report, this means whether the thoughts seem to be controlled by the dreamer, what we might term ‘reflective’ or ‘metacognitive’ thoughts. This is of interest because in fact, in many dreams we do not reflect on what we are thinking or doing. This movement towards less metacognition in dreamingmay be due to changes in neural activity (which I discuss in my next post).

In the study, 399 reports were collected from 16 university students ages 19–26. Reports were collected from participants who slept at home with a portable recording system called the NightCap during 14 days. Participants were awakened and signaled to provide a verbal report during sleep-onset (the transition from wake to sleep), Non-REM sleep, and REM sleep (the state where dreaming is most vivid).

As mentioned, the newly developed Measure of Hallucinatory States, a linguistic tool, was used to analyze the dream reports for both motor imagery and cognitive agency. References to motor imagery were detected from ‘manner-of-motion verbs’, and could be further assessed for whether the action was performed by the self or by other characters. Cognitive agency refers mainly to reports of thinking, but the program also needed to detect whether those thoughts were reflective or not.

In a report from a subject at sleep onset, early in the report the subject exhibits cognitive agency: “I’m just thinking how tiring it is to try to go to sleep like this, and, general stuff; wondering what’s going on outside my room because there is rustling noises,” whereas later as the subject drifts off his thoughts are no longer reflective: “Thoughts of a parking lot for some reason.” This is typical of thoughts as you drift off to sleep: They waver between being self-directed and appearing out of nowhere.

In an example from a NREM sleep report, we can see cognitive agency attributed both to the dreamer and to other dream characters: “There were a bunch of guys standing around my age and we were talking and thinking about baseball and about a trade somebody had made and whether or not it was wise.” Note the dreamer says “we were talking and thinking,” indicating that there is some cognitive agency of the self but also other characters.

Then, in a REM sleep report, there is a surplus of motor imagery, but a seeming lack of thought: “People start dancing then and I’m sort of dancing and there are these set of steps that people are dancing on and I’m sort of dancing on them and it’s, I don’t know, sort of weird, like, kind of spin around and jump around dancing, like, almost like… like singing in the rain guy around like a lamp post or something.” In this example, the motor imagery occurs both as self-action and as other dreamers’ action, as they are dancing, spinning, jumping… but thinking seems almost suspended as the dreamer simply partakes in the action.

In general, motor imagery increased from sleep onset towards REM sleep, and cognitive agency decreased along the same route.

The authors also note, “It seems that in REM sleep, to think is to do… that is, to realise any possibility that presents itself…which often leads dreamers to act on any impulses right away.”

For instance, one dreamer reports: “I walked into this room and there was some kind of restaurant-type scene and there was country music playing from this box on the TV. So I went up and started dancing and people jumped up and started dancing with me, but I was the best one.” As soon as the dreamer hears music, s/he simply starts dancing without thought, and indeed other dream characters join in too. The lack of thought seems almost to enable the occurrence of motor imagery.

In concluding, the authors claim that REM sleep dreaming provides a rich sensorimotor universe in which we can rehearse motor skills, and that a temporary suspension of reflective thought allows us to become fully immersed in motor imagery, which may enhance motor development during sleep.

Speth, C., & Speth, J. (2017). A New Measure of Hallucinatory States and a Discussion of REM Sleep Dreaming as a Virtual Laboratory for the Rehearsal of Embodied Cognition. Cognitive Science.